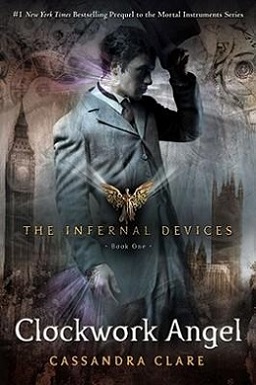 Summary: “In a time when Shadowhunters are barely winning the fight against the forces of darkness, one battle will change the course of history forever. Welcome to the Infernal Devices trilogy, a stunning and dangerous prequel to the New York Timesbestselling Mortal Instruments series. The year is 1878. Tessa Gray descends into London’s dark supernatural underworld in search of her missing brother. She soon discovers that her only allies are the demon-slaying Shadowhunters—including Will and Jem, the mysterious boys she is attracted to. Soon they find themselves up against the Pandemonium Club, a secret organization of vampires, demons, warlocks, and humans. Equipped with a magical army of unstoppable clockwork creatures, the Club is out to rule the British Empire, and only Tessa and her allies can stop them…” (Summary found on Goodreads).

I can go on and on about how much I love how Cassandra Clare writes. It is uncommon to see extraordinary writing in young adult fiction nowadays. I’m fairly certain that J.K. Rowling and Clare are among the few (though, I do have to say Rowling does write a little better). I particularly enjoyed reading Clockwork Angel (book one of The Infernal Devices series) because it is the prequel series to The Mortal Instruments. Even though it takes place in the 1800s, a few characters pass throughout both of the series. Though, only one remains constantly in every book and he is probably one of my favorite characters. My one and only issue with the book was the era. I personally have difficulty reading books that don’t take place in the modern day world because there is no television, cell phones, and even the manner they speak is different. It was definitely a change of pace to read about an era in which none of that exists, but it was, in a way, a breath of fresh air as well. I definitely loved the plot twists and conflict throughout the story. I was on the edge of my seat the whole entire time I read it! Though, I do have to say it would have been better if I read this series before The Mortal Instruments because now I have a general idea of what is going to happen at the end of this series, The Infernal Devices. I look forward to reading the next book (Clockwork Prince)…after I finish the many more I have sitting on my bookcase at home. I just can’t help myself in Barnes and Noble.