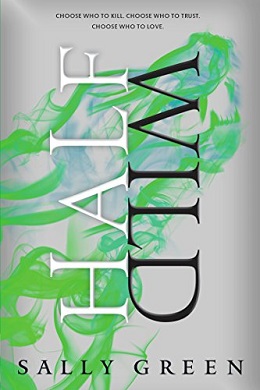 Half Wild by Sally Green

Summary: “After finally meeting his elusive father, Marcus, and receiving the three gifts that confirm him as a full adult witch, Nathan is still on the run. He needs to find his friend Gabriel and rescue Annalise, now a prisoner of the powerful Black witch Mercury. Most of all he needs to learn how to control his Gift – a strange, wild new power that threatens to overwhelm him.

Meanwhile, Soul O’Brien has seized control of the Council of White Witches and is expanding his war against Black witches into Europe. In response, an unprecedented alliance has formed between Black and White witches determined to resist him. Drawn into the rebellion by the enigmatic Black witch Van Dal, Nathan finds himself fighting alongside both old friends and old enemies. But can all the rebels be trusted, or is Nathan walking into a trap?” (Summary found on Goodreads).

Color me underwhelmed because this series went seriously downhill with Half Wild. I didn’t love Half Bad, but it was a solid four stars because I was hooked and found it quite unique…I also had a fondness for many of the characters. Unfortunately, I lost much of that with Half Wild. In fact, I only like a singular character now, Gabriel, and am not HAPPY with anybody else.

Annalise?? She can go. Please. I cannot stand her, mostly for the reason that she has literally no useful characteristics, is as bland as a saltine cracker, and serves the sole purpose of being Nathan’s love interest. AND NOT EVEN THE ONE HE SHOULD BE GOING FOR. Ugh. I’m so irritated and it’s been a month since I finished this. But seriously, can we end the idea that female characters exist to purely be a love interest and nothing more? Nathan’s motivations were “I HAVE TO SAVE THE GIRLFRIEND” instead of “I HAVE TO FIX THINGS AND LET HER SAVE HERSELF”. Though, that is kind of questionable because I don’t think she was in a position to save herself…hmm.

Don’t even get me started on Nathan who is just as sure about his feelings as I am that the Earth is flat (which is not at all, mind you). He spends the majority of the book toying with Gabriel’s heart and I hated it. I’ve been lead on before (you all probably know that by now given how passionate I can be in reviews) and it S-U-C-K-S. Characters, stop leading people on and get your head on right. If you do not know how you feel, don’t act on anything. Shouldn’t that be a motto or something?

Other than that bit of angriness, the formatting of this book changed?? And I kind of hated it?? Literally, there was an entire page filled with large-font bird noises. What is the actual point? Most of the writing advice blogs I’ve read seem to say that if it doesn’t progress the plot, it shouldn’t be included. So…Sally Green, what’s the purpose of that, might I ask?

And to even further my anger, I didn’t even understand what was going on for the majority of this book. Half Bad seemed to have some plot with a reasonable explanation for most actions, but Half Wild is a mess of Nathan being an angry horrible person, Gabriel pining after him, and Annalise being useless. Throw in a bunch of other characters doing murderous things or not doing anything and you have this book. Take this with a grain of salt, though, because I tend to forget plot-lines, which means the confusion might just have been my fault.

Why did I give this three stars, might you ask? Hmm. For starters, I would like to hug Gabriel and take him home with me because my son does not deserve this. He’s the only character I care about and is actually somewhat fleshed out to the point that he feels real. Then, of course, there’s Green’s writing, which did manage to keep me hooked and interested. The plot was messy as ever, but I couldn’t stop reading.

Not to mention, I did quite enjoy the thoughts about morality and good vs evil that it brought up. I’m kind of obsessed with the lines between good and evil, so this satisfied that need. I think it’s okay too that I don’t like Nathan because part of me feels like that was her intention? I don’t think she intended for him to be detested purely because he’s a jerk who does not understand romance, but I do think she intended for him to so morally grey that people wouldn’t outright be in love with him. That’s one sign of good writing because she did succeed at that.

I think I’m still going to read Half Lost because I’m attached to Gabriel…but I probably won’t be buying it.