By Book Hugger on May 7, 2019 in Dystopian Future, Science Fiction 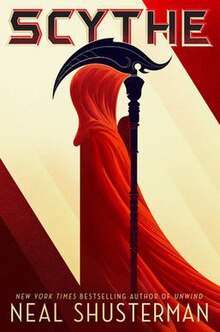 A world with no hunger, no disease, no war, no misery. Humanity has conquered all those things, and has even conquered death. Now scythes are the only ones who can end life—and they are commanded to do so, in order to keep the size of the population under control.

Citra and Rowan are chosen to apprentice to a scythe—a role that neither wants. These teens must master the “art” of taking life, knowing that the consequence of failure could mean losing their own” (Goodreads).

Hello, it’s been a long time, but I’m hoping to be back here in full force. I’ll do an update post with a wrap-up of the last few months and TBR, but for now, I want to talk about Scythe by Neal Shusterman.

I’ve only heard one semi-negative review of Scythe, which is why I anticipated that I would love it, but…I didn’t. A three star rating isn’t bad, but for me, it’s definitely not something I would reread, recommend, or possibly even read the sequel to. It’s not a bad book, but it’s not a good book either.

My problem with Scythe is more a matter of the kind of book it is. I love Young Adult, don’t get me wrong, but Scythe epitomizes the clichés of YA that I hate. The insta-love is painful to read about, the characters are “chosen ones,” the plot is predictable, the romance takes control of an otherwise interesting plot. I could go on, but I think we know what I’m getting at here: you see, I’ve read Scythe before, but it’s been called The Hunger Games or Divergent or any other YA dystopia. The only new thing it brings to the game is the world and in my opinion, such a creative and unique concept was wasted on two teenagers who spent the entire novel thinking about kissing each other.

Not to mention, Scythe is plot-driven. The book was so strong on world and plot that the characters, although they were focused on, weren’t powerful. Like I said, I feel like the concept was wasted on Rowan and Citra.

The only character I loved was Scythe Faraday and maybe Scythe Curie. Both provided an interesting analysis of the flaws of the world-system, which was what I loved about the book. The world is the most fascinating, well-done part of this novel and honestly, I’d read the sequel just to see how the concept of gleaning is continued, how the world might…fall apart…

I understood how the world worked despite its complexities and that deserves praise enough. I usually get really confused in books, but by the end, I had actually worked out most of the things I was perplexed by.

In the end, though, the book’s greatest downfall is Citra and Rowan. They have no real differences between them and it almost seemed like Shusterman threw together the same type of person and set them in different situations. They were boring to read about because they were so flat, so similar, so unoriginal. I’ve read them before and I don’t want to read them again.

My other main complaint is the predictability. I saw most of the plot twists coming from very far away…and I really wish I hadn’t. I don’t want to read a book and know how everything will go down. I want to be surprised!!

Anyway, one of Shusterman’s greatest gifts is his writing and his world-building. That alone can turn a one or two star read into a three for me. Will this be the last book of his that I read? Probably not, but I also won’t be going out to the store to get one right now.

View all posts by Book Hugger →
A Very Late Review of The Gilded Wolves
Updates!!! Including a few mini reviews