By Book Hugger on August 1, 2014 in Dystopian Future 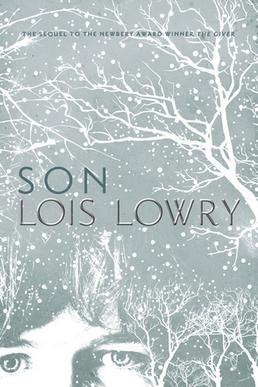 Summary: “They called her Water Claire. When she washed up on their shore, no one knew that she came from a society where emotions and colors didn’t exist. That she had become a Vessel at age thirteen. That she had carried a Product at age fourteen. That it had been stolen from her body. Claire had a son. But what became of him she never knew. What was his name? Was he even alive? She was supposed to forget him, but that was impossible. Now Claire will stop at nothing to find her child, even if it means making an unimaginable sacrifice. Son thrusts readers once again into the chilling world of the Newbery Medal winning book, The Giver, as well as Gathering Blue and Messenger where a new hero emerges. In this thrilling series finale, the startling and long-awaited conclusion to Lois Lowry’s epic tale culminates in a final clash between good and evil.” (Summary found on Goodreads).

Son is rated four stars because it was split into a few different parts and I only liked the first part. Lowry introduces new characters, but keeps her original characters too. The beginning part took place in the same town as the first book, so I liked that. The rest of the book took place in an unknown area and the same place the previous book took place. The violence is minimal, but there are a few high action scenes that have a little violence. There is some adult content. The main character has the profession of birth mother, but there is no profession of birth father (as far as I am aware), so I was left very confused. That may be over the head of younger readers, but not over mine. It was the longest out of the quartet and will keep kids busy.  I recommend this book to those who want to know what happens after Messenger.